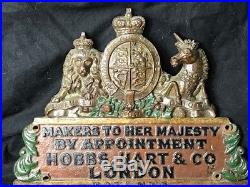 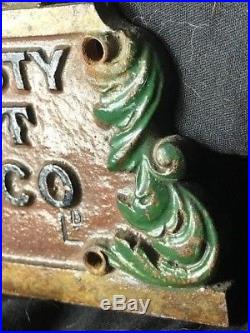 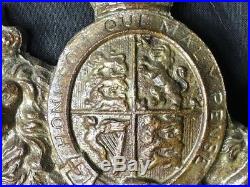 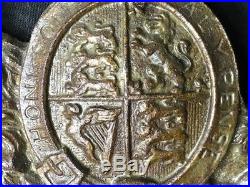 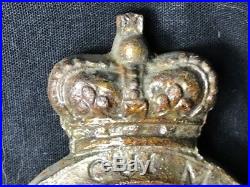 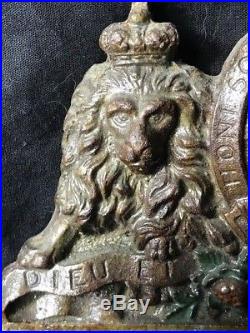 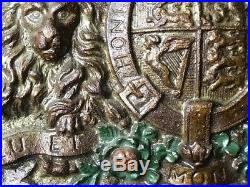 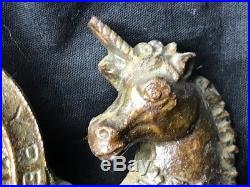 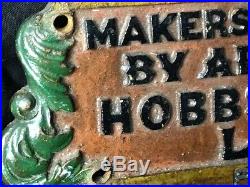 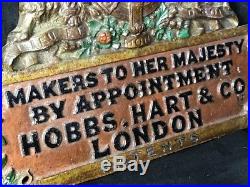 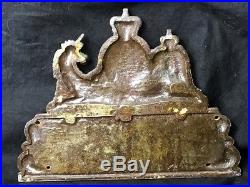 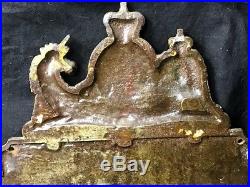 1 Rare small Antique Royal Warrant Coat Of Arms Plaque Hobbs Hart & Co London. 1 Rare Small Antique Royal Warrant Coat Of Arms Plaque Hobbs Hart & Co London. A most rare Royal Warrant plaque very sort after. Provenance bought from the Lord Hill Museum in Shropshire. With Anglo French Inscriptions DIEU ET MON DROIT which means “God & My Right” HONI SOIT QUI MAL Y PENSE translates to “Shamed be he who thinks evil of it”. This is the motto of both the British Monarch & the British Chivalric order of the garter. Hobbs Hart & Co London where An American lock-picker’s legacy makers of locks and safe makers. Makers To Her Majesty By Appointment. Hobbs Hart was founded by Alfred Charles Hobbs, an American lock dealer having famously picked the rival, previously regarded as impregnable, Bramah and Chubb locks at the 1851 Great Exhibition. He established the firm in 1852 as Hobbs and Company to manufacture locks based on his patents. By 1855 there was a factory at 33 Lawrence Lane, City of London with showrooms at 97 Cheapside. In 1860, following Hobbs death, John Matthias Hart took over management of the firm and began manufacturing safes and strong room doors. The company held a Royal Warrant from 1861 and supplied safes to the Bank of England. The firm was incorporated in 1887 as Hobbs Hart and Company Limited, the year Hart died. It is quite heavy & made of solid cast iron. With beautiful old antique original aged patina. Circa late 19th century Victorian era. Offered in fine old used condition. Having 2 holes on either side ready for you to screw on to your wall, no screws are included. Cash upon collection is welcome. Dimensions in Inches & Centimetres Approx. 7.75 High 20cm. The item “1 Rare Small Antique Royal Warrant Coat Of Arms Plaque Hobbs Hart & Co London” is in sale since Thursday, January 18, 2018. This item is in the category “Home, Furniture & DIY\Home Decor\Plaques & Signs”. The seller is “bargaingardenantiques” and is located in CHESTER, Cheshire. This item can be shipped to North, South, or Latin America, all countries in Europe, all countries in continental Asia, Australia, New Zealand.